I stop my thoughts for a moment, to pause and ask where I am now. I found myself standing on the beach, on Lesvos, Greece in the night, looking through binoculars over the Aegean Sea, spotting refugee boats crossing from Turkey and being harassed by the coastguard. I found myself in a refugee camp playing soccer with children. I found myself packing my bags to start full-time work in Palestine and Israel. This is my story in Christian Peacemaker Teams (CPT).

My name is Michael Himlie. Harmony, Minnesota is where I call home. I graduated from Manchester University, and I am a 24-year-old Church of the Brethren member. In August 2017 I completed training for CPT, an organization committed to building partnerships to transform violence and oppression in difficult circumstances where the work is proven to be highly effective. When I was 12 years of age, I eagerly…

Friends, these are the Mobility carts that we have delivered in Ethiopia. I was thrilled to see tonight that they are now established in India. We have a mission there, and I am sure that they can make use of these wheelchairs.

The organization that builds these wheelchairs was recently re-named, Mobility International. They require that the wheelchairs be given free of charge to the poor in developing countries.
We have a shop near our home here in Moundridge, Kansas, but there are more than 40 of these shops throughout the United States now. Volunteers build them, and they are given free of charge to indigent people throughout the world in need of them. Herb and I have seen these people, and many drag their bodies across the ground with blocks of wood in their hands to avoid lacerations. It costs $250-$300 to build each one, and they are life-savers for many.
Keep these chairs in mind if your local church is supporting missions in other countries. Mobility International is great to work with. 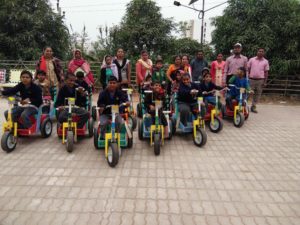 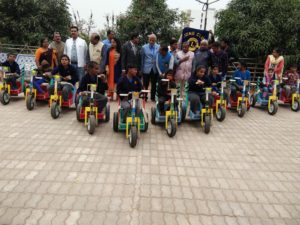 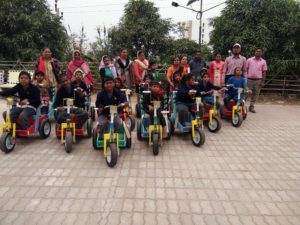 On 4th dec 2017 on the occasion of the world disabled day – week we have distributed the mobility carts to the needy children.
Please find attached photos of the same.
Thanking you for all your support.

This story of helping asylum seekers find a home in America was witnessed, and written, by Nancy Poling, the wife of one of Herb’s classmates at Bethany Theological Seminary.

A recent photo shows me standing in front of a saguaro cactus, my arms spread in imitation. Ah, southern Arizona in March, when flowers bloom and birds are passing through. For me the Sonoran Desert is a great place to hike.

The number of illegal migrants crossing our southern borders, trekking the desert I hike, increased between February and March (the same months retirees from the North migrate to Arizona.) Trump would have us imagine those coming from the south as invaders, most of them drug dealers, criminals.

On TV this morning camera footage out of Mexico showed a large group making camp at a city playground. Children play on swing sets while women sort through piles of donated clothing, searching for items that will fit their families.

These women and children are among the Honduran asylum seekers Trump would have us fear.

For those of us who have…

As a Christian Peacemaker Team member (CPT’er) on Lesvos, I worked on the Night Watch, monitoring vessels in the Aegean Sea between Turkey and Greece, and awaiting refugees to arrive on Greek shore in the night. While the other Night Watch volunteers are just as intimately focused on the care, rights, and wellbeing of the refugees crossing as I am, it was hardly ever talked about on an individual basis as we sat through the night together. Typically the conversations consisted of the number of refugees crossing, the conditions of Moria, changes in Greek or EU laws and regulations, where boats need to land or where the smugglers launch them. Never do we talk about refugees as individuals. Perhaps this is a coping mechanism for some of the Night Watch volunteers who have been through many arrivals, some of them traumatic. I still look into the night…

What would you do if soldiers broke into your home and held your family hostage?

What would you do if your children were screaming, “Mommy! Daddy! Help Me?”

Where would you hide if you wended your way through the forest, only to find hucksters nestled in the bush, ready to rob and kill you?

In March of 2014, Antonio Guterres, then the United Nations’ High Commissioner of Refugees, stunned the world with this pronouncement: That 60 million people had fled the lands of their birth and were searching for a country to call ‘home’.

Cases in point:
. . . Moses leading the children of Israel to the Promised Land;
. . . Mary and Joseph fleeing with Jesus to escape King Herod’s henchmen;
. . . Now, let’s fast forward to the common era:

. . . During World War II, refugees in Hitler’s Germany fled by the millions to receiving countries;

By the time the conflict drew to a close, 1.5 million were among the desperate people who survived. Thus, history echoes the refugees’ story in every generation.

.  . . Approximately one-third of these are Refugees who can never go home again; another third are Asylum-seekers who are searching for a safe place until the violence has subsided, and another third of them are Internally Displaced Persons (IDPs) who are living in their home country, often with relatives or friends, but at a safer distance from the violence.

The time has come in our history whereby we must open our doors to ‘the other’. Only in doing so can we become the ‘hands and feet of Jesus’. It is a moral decision, a political decision, and it requires a humanitarian response.  We must work together to salvage these vulnerable people.

Emmett Eldred is right on here. The man knows what he is talking about: “BLACK LIVES MATTER”!

Just before I was going to go to bed tonight, I saw news of several police officers being shot in Dallas during a Black Lives Matter protest. As the story developed, I watched in horror the news of at least eleven officers shot and four dead by two snipers with high-powered rifles. By tomorrow, we’ll know more information. We’ll likely wake up to knowledge about who conducted the shooting and why, and we might (though I pray not) learn of more police officers or other individuals killed or injured.

As with so many instances of horrific violence lately, there are no words. To see any lives claimed by senseless violence (and I believe that all violence is senseless) is indescribably tragic. No doubt, these officers did much to serve and protect their communities. No doubt, they had loved ones whose lives will be forever changed. Jesus reminds us that blessed…

PET MO-Columbia update 4-26-16 PETs built to date since 1-1-16 #517 When I pull into my parking space at PET there is, in front of my pickup, a Peace Pole. We planted it several years ago in a special ceremony involving the Columbia Chamber of Commerce. My goal then was to spark a movement to […]

via Is PET a “machine of peace”? — A Gift of Mobility… The PET® Mobility Project

Seun Oke from Nigeria came to the US earlier this fall. She was scheduled at several PET shops around the US to talk about receiving her PET wheelchair and how it made a difference in her mobility. Today, she’s engaged to be married and holds an office job, both of which she attributes to her ability to use the PET. I was impressed listening to her. She, also, has a neat sense of humor. Listen to her story for yourself on You-tube here. You will be amazed.

“Mizzou Homecoming Parade was a great exposure for Columbia PETs. Fans along the route clapped in response and exclaimed they heard of PETs and saw one today for the first time. Rotaract Chapter provided 7 walkers. 24 total handed out brochures.”